Having to initiate the rescue of a civilian from a structure fire will be one of the more pressure-filled moments in a firefighter’s career. 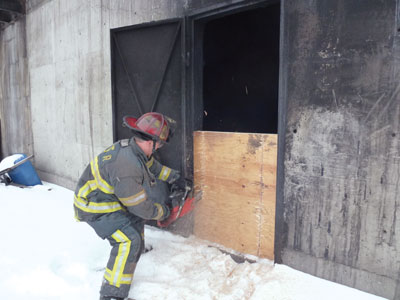 PHOTO 1: Use the saw to cut two vertical lines below the window ledge, each about three inches in from the window’s edge. 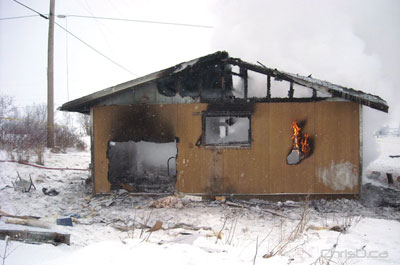 PHOTO 2: Firefighters used a chainsaw to cut through the wall of this residence in order to rescue a two-month-old infant. Unfortunately, she succumbed to her injuries later that night. 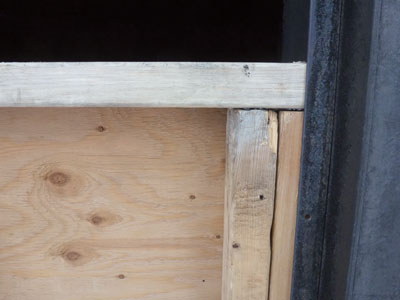 PHOTO 3: Most window ledges are constructed in the same way: a horizontal beam is supported by two cripples – vertical beams that run directly below the window ledge. 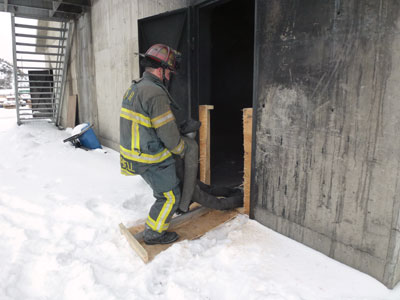 PHOTO 4: Once the cuts are complete, remove the bottom portion of the wall. Now access can be quickly gained into the structure. 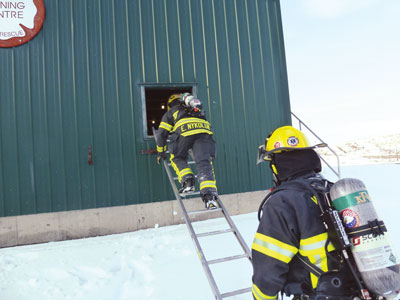 PHOTO 5: A ground ladder can be used in a rescue situation as well. Once the window has been breached, place the straight ladder on the windowsill. 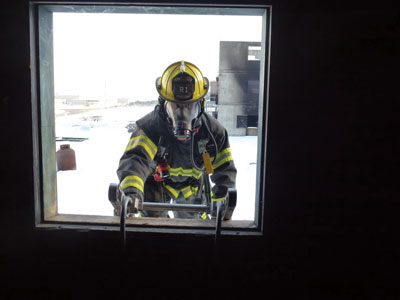 PHOTO 6: Two firefighters climb a straight ladder, making entry through the window and into the structure. 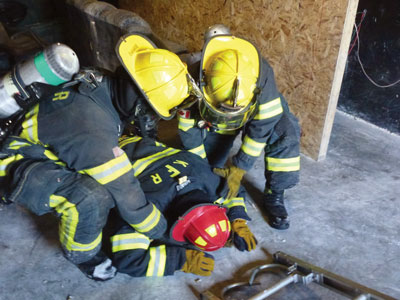 PHOTO 7: Firefighters prepare to load a victim onto the ladder, which is now inside the structure and will be acting as a stretcher. 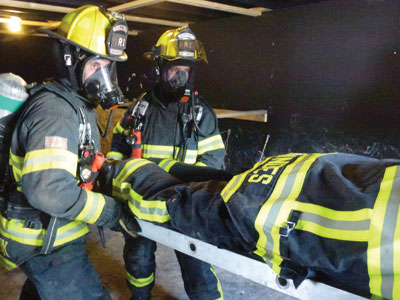 PHOTO 8: Once inside the structure, the rescuing firefighters load the victim – in this case a firefighter – onto the ladder, using it as a stretcher.

PHOTO 9: The firefighters inside the structure then slide the ladder, with the victim on top, out the window, to other firefighters waiting outside. photos By Neil Campbell

All fire departments need to maintain good skill sets with ground ladders. A realistic rescue scenario for any fire department is one during which the crew arrives on scene and a civilian is calling for help from a window. The quickest and safest way to rescue a civilian in this type of scenario is not to make entry into the structure and remove the victim through the heat and smoke, but to get the victim outside of the structure and into the fresh air, using a ground-ladder rescue.

This type of rescue works best when the civilians are able to assist in their own evacuation. There are times when that is not the case and firefighters have to be prepared to try different tactics to have a successful outcome.

At 12:30 p.m. on Jan. 16, 2011, there was a structure fire in a home in St. Theresa Point, Man. The fire began in a chimney attached to a wood-burning stove, spread into the attic and the rest of the home. There were six children, aged two months to 13 years old, in the home at the time. An adult relative who had been looking after the children had gone next door for a moment when the fire began. Four older children were able to escape the residence; however, a 16-month-old girl and a two- month-old girl were still inside the home. A band constable from St. Theresa Point entered the burning home through a bedroom window and rescued the 16-month- old girl. He was turned back by smoke and flames and could not reach the younger infant.

The band constable and a community member then cut a hole through the bedroom wall of the residence with a chainsaw and were able to reach the two-month-old (see photo 2). Both children were taken to the local nursing station for treatment. The two-month-old succumbed to her injuries and was pronounced dead at the nursing station.

This is a tragic story. But the courage of the constable and the imagination used to gain access to the home to initiate the rescue are impressive.

The idea of turning a window into a door to gain access to a structure is a rescue tactic that can be accomplished quickly and safely and is ideal for a minimum-manning response.

To initiate a window-into-a-door rescue quickly and effectively, firefighters need to understand some minor building construction features. The construction of the wall below the window ledge is very common – a 2 x 4 lying flat supported by several 2 x 4s positioned vertically. Two key structural members – called cripples – are positioned vertically and are located immediately below the side of the window ledge (see photo 3). The ideal point at which to start the cut with the chainsaw is three to four inches to the inside of the window; then run the cut in a downward motion all the way to the floor.

Safety is the first thing to be considered. All members on the fire ground must be wearing full PPE including gloves and eye protection. Bucking chaps are strongly recommended for those operating a chainsaw. Turn off all utilities to the structure as there is a possibility of receiving a shock from a household circuit when wires in the wall are cut. Breach the window and remove the glass. Position the bar of the saw on the ledge about three inches inside the window frame; this will ensure the cut is made through as few structural members as possible. Once the cut is initiated, try to maintain just enough of the bar through the wall to make the cut complete. There is always the chance that the civilian you are trying to rescue is on the floor immediately next to the wall being cut. Continue the cut from the window ledge down to the floor and repeat the process on the other side of the window ledge until you have two cuts from ledge to floor (see photo 1 on page 60). Once the cuts are complete, pull the cut portion of the wall out and down from the structure. Access can be quickly made into the structure to attempt the rescue (see photo 4).

These rescue tactics can be accomplished by career, volunteer or minimum- manned fire departments. All that is required is some basic training, a minimal amount of equipment and a willingness to do whatever it takes to have a successful outcome to a rescue scenario. 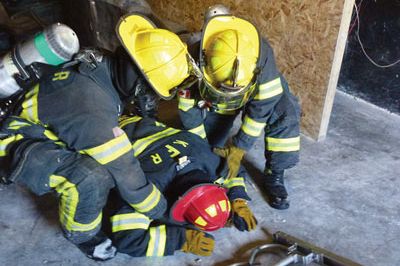 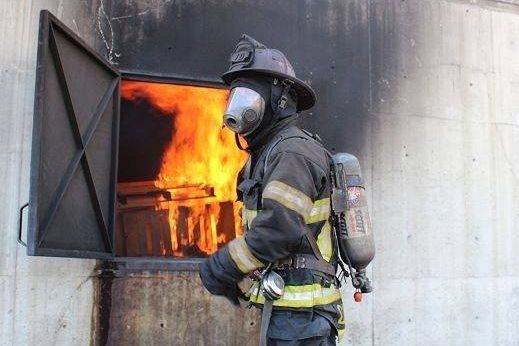 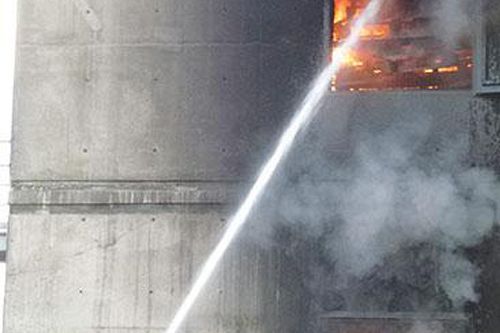 What We're up to

Follow Us
Another great day training with the Domtar Emergency Response Team. Todays training covered a wide variety of topics including the activation of the Firebozz protection sprinkler system.
CSRD Firefighters wrapping up their practical skills evaluation of the 20 hour Rapid Intervention Team training program. This physically demanding training program covers all facets of an emergency ma...
CSRD Firefighters working hard at the Forcible Entry component of the Rapid Intervention Team training program.
Congratulations to New Gold Fire and Mine Rescue D Platoon for the successful completion of there Hazmat Operations certification. Well done team, your hard work paid off.
Thank you Joss Advocaat for another high quality instructional training session with the Newcrest Fire and Mine Rescue team. All the attending members were successful in achieving their First Responde...
Congratulations to New Gold Fire and Mine Rescue A Platoon in successfully completing their Hazardous Materials Operation level practical skills evaluation. Well done team ! For some members this was...
A few more pictures of the Pritchard Fire Department Exterior Operations training weekend, pre-covid. I hope we get the chance to do it again soon.....
Training went late tonight with Ashcroft Fire Rescue. The team was working on water supply, pumps and pumping, and hose advancement drills. Thanks for working late everyone, your hard work is appreci...
I was fortunate to be able to spend the day with this crew today, New Gold Fire and Mine Rescue C Platoon. The crew successfully completed their Hazardous Materials Operations evaluation today as they...
New Gold Fire and Mine Rescue members working with a vehicle fire prop at Kamloops Fire Rescue Training Centre.
New Gold members Petherick and Martin working hard during live fire training. Nice work guys !
New Gold Fire and Mine Rescue Interior Operations evaluation day. Nice work everyone, your hard work and effort paid off with everyone being successful.
Provincial Fire and Safety T-Shirts are here soon ! Watch for our new website and sales division.
Tobiano Fire Department members participating in a donning and doffing PPE and SCBA drill. Nice job Team !
Another great weekend of Rapid Intervention Team training with the Columbia Shuswap Regional District Fire Department members. Fantastic job everyone!
Pretty happy to be training with an amazing group of people at Pritchard Fire Department......and lighting stuff on fire.
Incident Command Strategies and Tactics training with Ashcroft Fire Rescue. Nice work everyone.
Forcible entry, salvage and overhaul training with New Gold Fire and Mine Rescue.
Late night ventilation training with the Pritchard Fire Department. Nice work team!
Pump Operators worse day.......
See More Posts